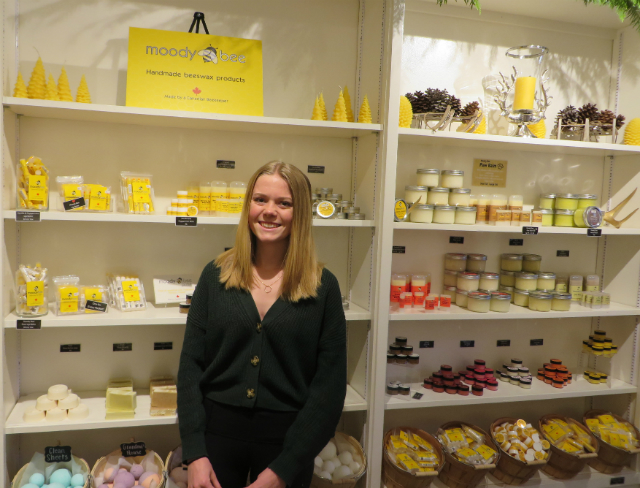 After two years in the old location, Moody Bee moves across the Platzl to a new store.

Randy and Krista Moody, along with staff and helpers, have been working feverishly for the past two weeks to totally renovate the new location.

According to Randy, the larger store will have a separate factory space in the back and a bigger retail space out front.

The new store will have all of the great products you’ve come to love and appreciate.

While Moody Bee has “sold out” of the pure raw unpasteurized and unfiltered honey from the Kootenay’s, Randy is not worried. “I’ve got a nice network of folks I work with out there [on the West coast]. We have some unique nectar that came from coriander plants. We’re looking to get some blueberry and raspberry honey as well as the standard clover and alfalfa honey which is similar to what we get around here,” he said.

“We have a huge line of beeswax products – lip balm, hand balm, soaps with honey,” added Randy. The vanilla and peppermint lip balm is acclaimed across Canada.

Randy said, “A lot of people wanted just plain [lip balm], nice and simple, they don’t want anything in there.” Based on this customer feedback, a new product line was created. Its called, Moody Bee Pure. “Everything is just bare bones, same texture, same oils, but no essential oils, no additives.”

Bulk bees wax is a big hit among local residents who buy over 4,500 kg every year.

You can still buy honey accessories along with everyone’s favourite funky socks and locally crafted and sculpted crystals as well as natural crystal clusters.

Moody Bee has used POS-n-go for the past two years with no down time. “It’s excellent, very user friendly,” said Randy. He tells the story of how his 10-year old daughter sits down at the counter and runs POS-n-go even after not being around the store for awhile.

“The continuous up-grading [of functions and features] to what we thought was already a fine product to become an even better product,” is something Randy really appreciates.

“I love the [web portal dashboard] graphs. You can just glance everyday to see how sales are. You don’t have to dive deep if you just want a snap shot,” he said. Also, “There are so many reports you can run, it makes [financial] analysis phenomenal, its great.”

Stop by, congratulate Krista and Randy Moody and staff, see the new location and celebrate until the cows come home, or maybe that should be until the Moody’s head home.